Get the Live365 app & search Delcity

On this episode we had Special Guest, MC/Actor/Comedian/TV & Radio Host, D-Stroy (of The Arsonists) on the show to talk about his new track 'Touch & D-Stroy' with Tony Touch on 'Piecemaker 3' out now on Amazon & iTunes and an upcoming solo project.
He also talks to us about starring on the comedy web series
East WillyB on YouTube & www.eastwillyb.com.
Follow him on Facebook/Twitter/Instagram @iDstroy & go to iDstroy.com 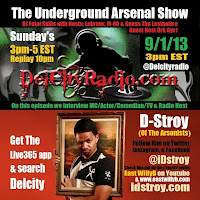